You are here: Home / Medical Studies / Light Sensitivity and Fibromyalgia and migraines

Granted, many of us also suffer from migraines, and light sensitivity is a huge trigger for migraines.

Taking a look at a survey performed by Theraspecs, it’s interesting to see that regardless of migraine, Fibromyalgia patients tend to report a higher sensitivity to light between attacks (or flares) than any other group in the survey (including those with migraine).

I found that rather interesting.

Searching through medical literature returned surprisingly little information on this connection. However, I did find one study that found that patients with Fibromyalgia report a massively higher rate of photophobia (light sensitivity) than those without.

As in, 70% of those with Fibromyalgia report photophobia, while only 6% of the pain-free individuals in the study report the same issue. That’s huge!

We often equate light sensitivity to migraine, but it’s not just a migraine thing!

Light sensitivity isn’t the only neurological symptom that those of us with Fibromyalgia report more commonly. We are also more likely to have poor balance, weakness, and tingling of the arms and legs, and numbness. 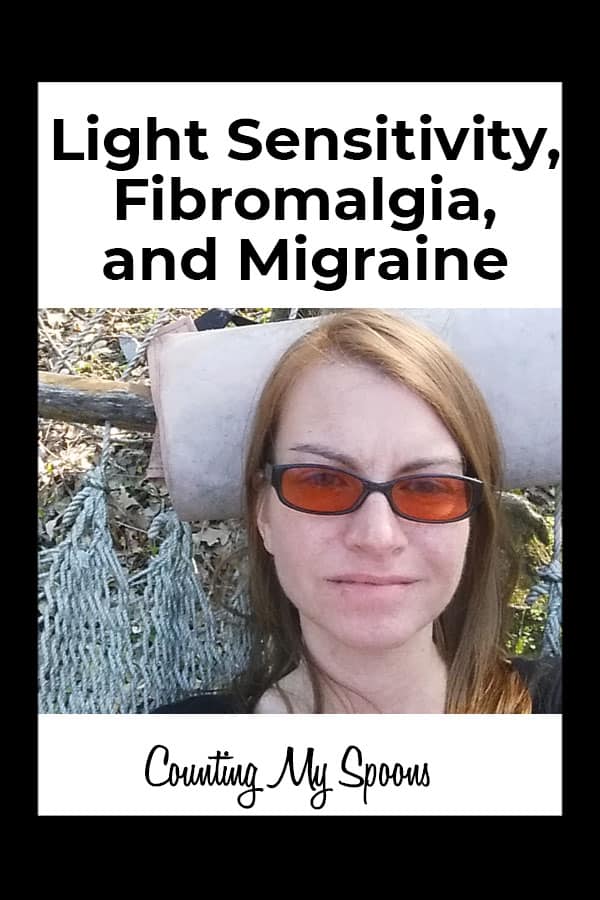 For the last year and a half I’ve been wearing Theraspecs custom-tinted lenses to help with light sensitivity.

When I initially tried them I only wore them when I’d have a migraine attack. I noticed a definite improvement to my migraine symptoms when wearing them, so when I renewed my prescription I went ahead and ordered my lenses with Theraspecs custom-tint.

I have a pair that I wear daily  and also a pair that are tinted as sunglasses (obviously a lot darker than my daily wear).

I’ve noticed a drastic decline in the number of migraine attacks during the time that I’ve been wearing these glasses, and typically when I do have a migraine attack it’s not nearly as bad as it would have been prior.

Prior to Theraspecs it had become the norm for my migraine attacks to last multiple days, but now it’s a rarity and typically only happens when I wait several hours to take an abortive medication.

Another thing that has really helped reduce the number of migraines that I endure is avoiding places with fluorescent lights. When I was in school I couldn’t avoid them. I spent hours every day under flickering fluorescent lights and as a result I had a lot more migraines during that time (I’m fairly sure the stress of school didn’t help matters either).

I hadn’t really given a lot of thought to how light may also be impacting my fibromyalgia symptoms, but I had noticed that when I was in a flare I was more sensitive to light. I’d prefer to stay indoors, in a dark room with fewer sensory inputs (much as if I had a migraine).

I’ve also noticed more in the last year or so that when I do get a migraine it often comes without the searing pain of a migraine, but rather presents with more fibromyalgia-like symptoms (stiffness, body aches, etc). As if my whole body is being affected by the migraine instead of just my head (which used to be the case when I was younger).

If I had the choice, I’d take the head pain.

I don’t know if Theraspecs have had something to do with decreasing the head pain, or if it’s just a change that has come with life. I’m getting older.

Migraines run in my family and my mom’s migraine attacks drastically decreased when she was about my age (with hormonal changes, etc). My brother, on the other hand, seems to be having worse and worse migraines the older he gets.

So, what about you? Do you suffer from light sensitivity and Fibromyalgia?

Below infographic provided by Theraspecs

I am not a doctor. I do not claim to be a doctor. I do not play a doctor on TV or the internet. I simply share my experiences and what has worked for me. We are all different and before you try any new treatment, exercise, supplement, etc you should talk with your doctor (the real one, not the one on TV).
811shares