You are here: Home / Coping / Facing Fear with Chronic Illness

Chronic illness can create a life of fear, as if there wasn’t enough fear in your life already. For me, when chronic illness entered the mix, a whole new set of fears were created. Suddenly, I was afraid to do anything.

It seemed that anything I did could create a flare. One moment I might feel wonderful and decide to leave the house and then an hour later I’d be hit with a flare so massive I wasn’t sure I’d make it home. When you live life this way it can be easy to retreat and decide that it’s not worth taking a risk.

Too often, the result is that we out of life for fear that anything we choose to do will just land us in a flare and we’ll spend a week paying for an hour of fun. It feels like it’s just not worth it. But, that’s no way to live. At some point we have to face the fear that comes with chronic illness.

Others with chronic illness often look at me a bit sidewise when I say that I’ve chosen to just live and not worry about the potential flare. Part of that is that I’ve learned that certain things will definitely cause a flare – so I just prepare for it. I’ve also learned how to lean into a flare so that it doesn’t last as long or feel quite as bad.

Mostly, I’ve just decided that a life not lived is not a life worth living. So, I’ve opted to face my fear instead.

A couple of years ago I attended the Business Boutique Conference – a conference geared towards women trying to create a business. One of the mottos of the conference is “Do It Scared”. Last month, I found a book by the same name. I’m not sure which came first – the book or the conference – but so many themes overlap between the two it’s obvious that one was influenced by the other. “Do it Scared“, the book by Ruth Soukup, talks about the seven fear archetypes – or the unique ways that fear that keeps us from moving forward. As I read through them I realized that I’ve fought every single one of them. I’ve overcome a few of the most common fears, but there are a couple that still very much plague me.

A quick summary of the fear archetypes:

Every one of these fear profiles has both positive and negative attributes. The key is learning to overcome the negative without losing the positive.

While I’ve struggled with all of them at different times, the ones I still struggle the most with are “The Outcast” and “The Self-Doubter”.  I’ve always been the type to do my own thing. The upside is that I’ve never been one to get pulled by peer pressure. Nor, do I have an issue voicing my own opinion. The downside is that I struggle with that voice in the back of my head that often holds me back from doing all that I could.

This is the voice that has kept me from jumping too far out of my comfort zone. This voice and The People Pleaser have kept me from applying for jobs that I wasn’t 100% sure I could do, for fear of looking silly. Even though, deep down I knew I could have done it. On the other hand, the Outcast in me is the reason I’ve not hesitated to jump at doing things like starting a blog, starting a business, or even buying an RV and deciding that I would live in it full time.

These days I try not to let fear rule my life. I’m more likely to just jump right in, than to stop and spend a lot of time thinking about doing something. The truth is that I know that the fear side of me would stop me from doing so many things if I stop to think about it.

I’d start worrying about doing it right, instead of just doing it. As my friend Rob at SyndioHealth reminds me – Perfection is the enemy of Done. If we want to get something done, we can’t get hung up on being perfect.

Perfection is the Enemy of Done. You can spend your life trying to make sure everything is perfect, and yet do nothing at all.Click to Tweet 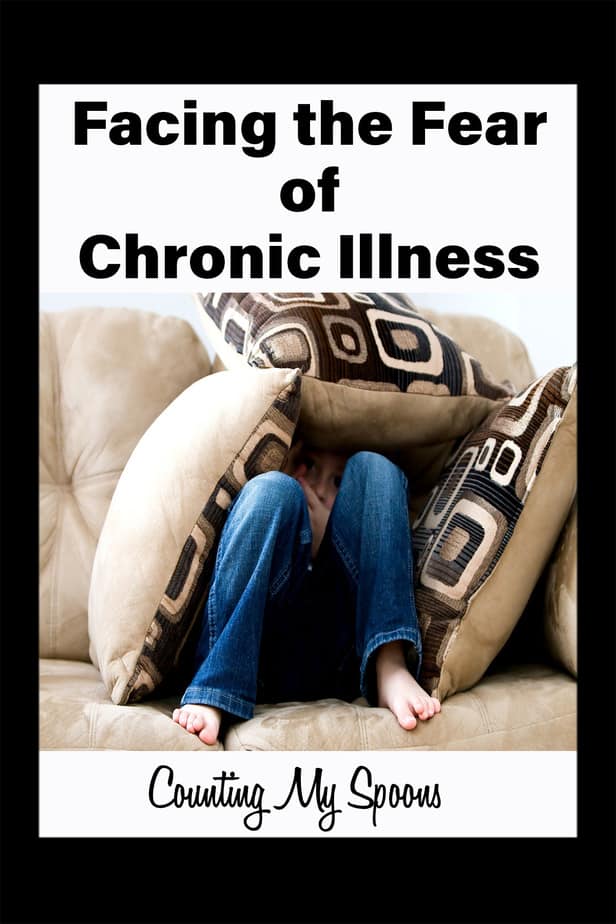 My greatest fear the last few years has been a fear of not living. A fear that my current state was the best it would ever be.

Physically, I was in better shape than I’d been in years. The worst of the chronic illness stuff for me was from 2010-2012. Since then, I’d been mostly living again. But, the fear was always there – how long would this really last? How long before some new illness hit me and knocked me on my butt again?

While I’ve been planning this shift to RV life for the last couple of years, it was a change filled with fear. Not only was I afraid of all the potential pitfalls, my illness earlier this year brought to the forefront the risk that something new could crop up while I’m on the road and unable to access my healthcare team.

There was also a fear that I’d jump in the deep end and hate it. What if I spent thousands on this new home-on-wheels, only to immediately hate this new life? The risk was real and I addressed it often.

Thankfully, I’m not alone. There’s actually a great community of RV lifers online, and -even better- within that community there are many people who live and travel full time in their RV despite chronic illnesses. In some cases, they have chosen this lifestyle BECAUSE of their chronic illnesses.

J. Dawg has spent his life with ulcerative colitis. Instead of letting the fear of not being near a bathroom stop him from traveling, he found a way to travel that lets him not only keep a bathroom close, but keep HIS bathroom close. Nor, has he let a colostomy do the same. He’s found that traveling in an RV gives him the freedom to do what he loves, with the knowledge that he always has an easily accessible bathroom.

Mary K.D. D’Rozario, author of The Airstream That Ran Away With the Spoon, opted for the RV life and has found that doing so has helped her cope with chronic fatigue, by allowing her to chase the weather that is most suitable to her illness.

And, one of my favorite YouTubers, Tara of ChangingLanesRV, lives with chronic Lyme disease. After spending so much time suffering in bed, she and her husband Chad decided that there was no sense in waiting to live. So, as soon as Tara was through the majority of her treatments they sold the house and bought an RV. They knew the illness would be there, but at least this way on bad days she could still enjoy an amazing view.

And, now I’ve joined all of these folks. I’m facing my fears. The fear is still there. But, it lessens with each passing day. Each day brings new challenges, but also new successes. Just putting holes in my RV walls to hang my vacuum was a fearful event. But, once it was over I’m now a lot less bothered by the idea of adding more holes.

At the moment, we are staying camped in or near my hometown. If something were to come up health-wise, it wouldn’t be an issue to get care. Eventually, we will travel and I’m still not sure what that will mean. How I will get my compounded meds, will my insurance cover me if I need urgent care in another state? How difficult will it be to get my supplements shipped to me as I travel? All of these questions still need answers. But, I know I’ll figure it out.

What are your biggest fears? What fear profiles describe you? What have you done to face your fears? Share your thoughts in the comments below.

I am not a doctor. I do not claim to be a doctor. I do not play a doctor on TV or the internet. I simply share my experiences and what has worked for me. We are all different and before you try any new treatment, exercise, supplement, etc you should talk with your doctor (the real one, not the one on TV).
173shares